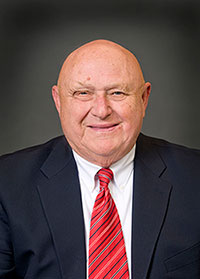 In addition to his supervisor role, Hyland served as chairman of the Public Safety Committee and co-chairman of the Community Revitalization and Reinvestment Commit¬tee. He served on the Inova Health Care Services Board and the National Association of Counties Board of Directors; and regionally for District of Columbia, Fort Belvoir and Prince William County interjurisdictional committees.

“Gerry Hyland was a supervisor for the people and the epitome of a public servant,” says Storck. “Throughout his 30 plus years of public service, he improved the lives of many, many individuals in Mount Vernon and Fairfax County. Gerry’s innate compassion for the struggles of residents along the Richmond Highway corridor was instrumental in getting the South County Center built and bringing human services to Mount Vernon and Lee residents who otherwise had to travel long distances.”
The Gerry Hyland Government Center is home to family services, community health, career programs, a senior and teen center and more, including many public rooms essential for community meetings and workshops. “It is a fitting tribute that we honor Gerry by naming the county government center after this beloved public servant,” says Storck.

Hyland also served as chairman of the Virginia Railway Express and is a past president of the Virginia Association of Counties. He has served as a board member of the Northern Virginia Transportation Commission, the Washington Metropolitan Council of Governments, the Environmental Policy Committee, the Woodrow Wilson Bridge Improvement Study Coordinating Committee, the Metropolitan Washington Air Quality Committee, the Washington Metropolitan Area Transit Authority and the Board of Zoning Appeals. He is the former chairman of the Fairfax County Human Rights Commis¬sion and is a retired Colonel in the United States Air Force.

Hyland was instrumental in the efforts to close the county I-95 landfill, he led the effort to keep the Inova Mount Vernon Hospital open and led the transformation of Lorton. He is known as an advocate for all people, as well as a pun master and gentleman farmer.

“No one has dedicated themselves more to our community than Gerry Hyland,” says McKay. “His decades of service were invaluable to the success of Fairfax County and the Mount Vernon District and we’re a much better, stronger, safer and compassionate community because of him. This newly named center is but a small token of our thanks to him for being a leader and role model to all of us.”

In addition to Storck and McKay, speakers at the dedication ceremony included Congressman Gerry Connolly, Congressman Don Beyer, former Congressman Jim Moran, Fairfax County Board of Supervisors Chairman Sharon Bulova and William “Bill” Bock, a close friend to Hyland. Hyland then addressed the large crowd of friends and colleagues before the new signage in front and behind the building was unveiled. 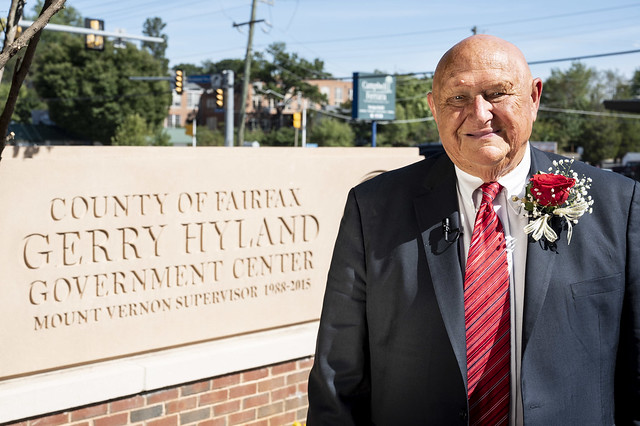